Tradition and avant-garde: the major spring events in Venice

Tradition and avant-garde: the major spring events in Venice

This is the time of year that important Venetian exhibitions and traditional festivities open for the year round.

April 25th is the name-day of Saint Mark, patron saint of the city. On this day, it is tradition to give a rosebud (bòcolo in Venetian dialect) to your beloved as a sign of your love.

Take the opportunity for a romantic gesture and pick a ‘bòcolo’ in a local flower shop or stand that donates your offer to charity. 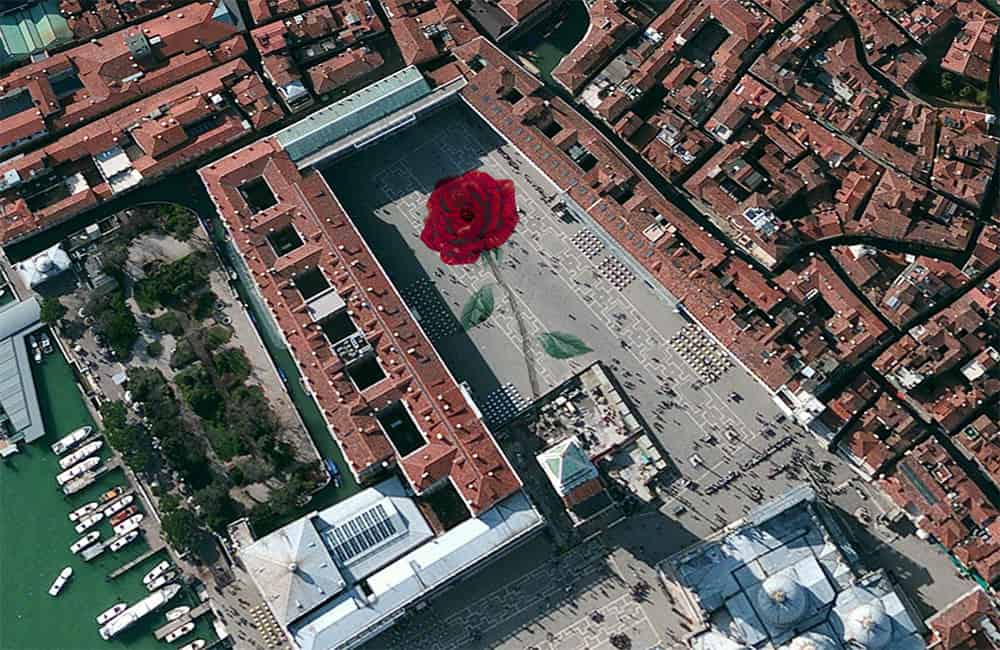 Many exhibitions are inaugurated in April and open a season full of cultural offers. This year, Architecture will be the key element in the city with the inauguration of the 16th edition of the Venice Biennale of Architecture. Every year, this event offers the possibility to visit the institutional spaces of the city’s Arsenale, the pavilions of the Giardini, as well as many other sites around the city.

It is a unique opportunity to enter many palazzi and buildings that are usually closed to the public, bringing together the charm of historic sites with contemporary displays and exhibitions.

The doors of the two Pinault Foundation houses on the Grand Canal reopen, where it is possible to take part in free guided tours once a week.

Dancing with myself is the title of the show curated by Martin Bethenod and Florian Ebner at Punta della Dogana. The exhibition investigates the primordial importance of self-representation in art from the 1970s to today, and of the role of the artist as protagonist and object of the artistic work through 145 pieces, the core 100 of which are of the Pinault collection and many of which have never been on display in Venice before.
Exhibition: 8 April – 16 December 2018 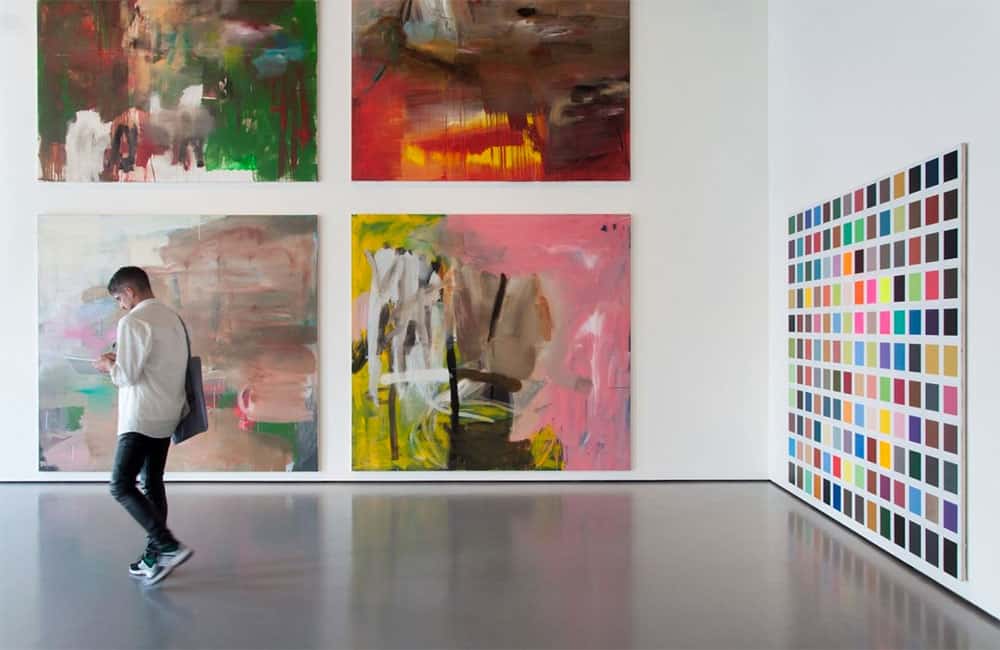 Punta della Dogana is a fascinating and unique building: its peculiar triangular-shaped layout was were arriving ships were required to stop and present their goods to the city customs. The renovation of its spaces by archi-star Tadao Ando (who also oversaw the project for Palazzo Grassi’s interior renovation) has given new life to the building: it preserves the historical charm of its outer shell while hosting a wonderful recovery and new design of the interiors to house the works of the Pinault collection.

A few meters away, Palazzo Grassi inaugurates the Cows by the Water exhibition, the largest monographic show in Italy dedicated to the German artist Albert Oehlen, curated by Caroline Bourgeois. The exhibition does not follow a chronological order but is rather marked by a syncopated rhythm between the different genres and periods, thus underlining the central role of music in the artist’s production: a metaphor of his work method, where contamination and rhythm, improvisation and repetition, density and harmony of sounds become pictorial gestures. Listen to the artist’s playlist on Spotify
Exhibition: 8 April – 6 January 2019 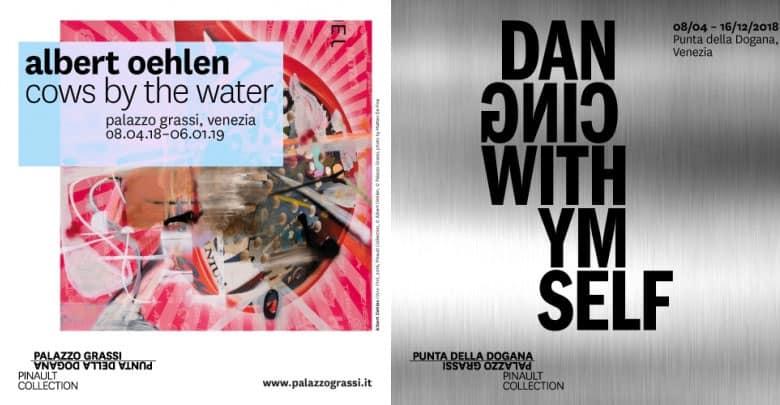 On Sunday, May 13rd, the city hosts the Festa della Sensa, on the same day of the Feast of the Ascension. On this occasion, the ceremony of the Sposalizio del Mare (Marriage of the sea) is held, which attracts millions of visitors each year for the procession of traditional boats in the Basin of Saint Mark’s, headed by the Bucintoro, the ship of the Doge.
Originally, the ceremony had a propitiatory character with regards to the sea (benedictio maris).

Today, like yesterday, the procession of boats led by the Doge’s ship begins in Saint Mark’s and reaches the Lido. At San Nicolò on the Lido, a laurel wreath (initially a gold ring) is thrown into the sea and an ancient traditional prayer is recited so that “For us and for all navigators, the sea can be calm and peaceful”. 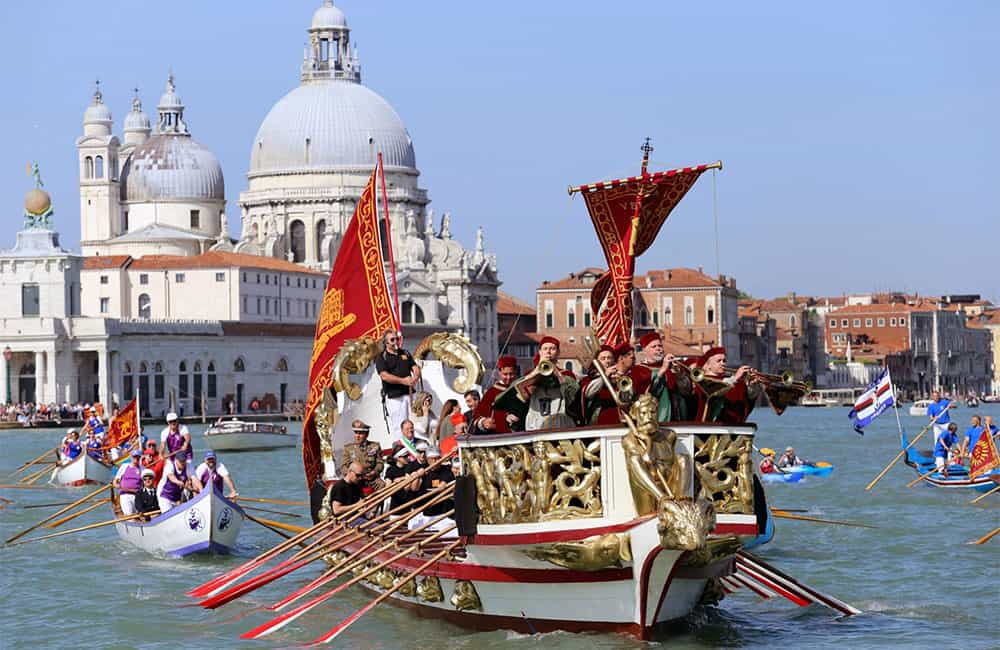 We recommend that you find a spot on Riva degli Schiavoni, between Saint Mark’s and the Arsenal, to see the water parade before your eyes, guided by the ship of the Serenissima on which the city mayor holds the traditional role of the Doge and is followed by hundreds of row boats from various Venetian rowing associations.

On May 26th there will be the inauguration of the 16th edition of the Venice Biennale of Architecture. The title of this year’s edition, Freespace, was chosen by the Irish curators Ivonne Farrell and Shelley McNamara. This is how they explain their thematic choice: “We are interested in going beyond the visual, emphasizing the role of architecture in the choreography of daily life. We see the earth as Client. This brings with it long-lasting responsibilities. Architecture is the play of light, sun, shade, moon, air, wind, gravity in ways that reveal the mysteries of the world. All of these resources are free […] We invite all participants and every national pavilion to bring to Venice their Freespace, so together we may reveal the diversity, specificity and continuity in architecture based on people, place, time, history, to sustain the culture and relevance of architecture on this dynamic planet”. 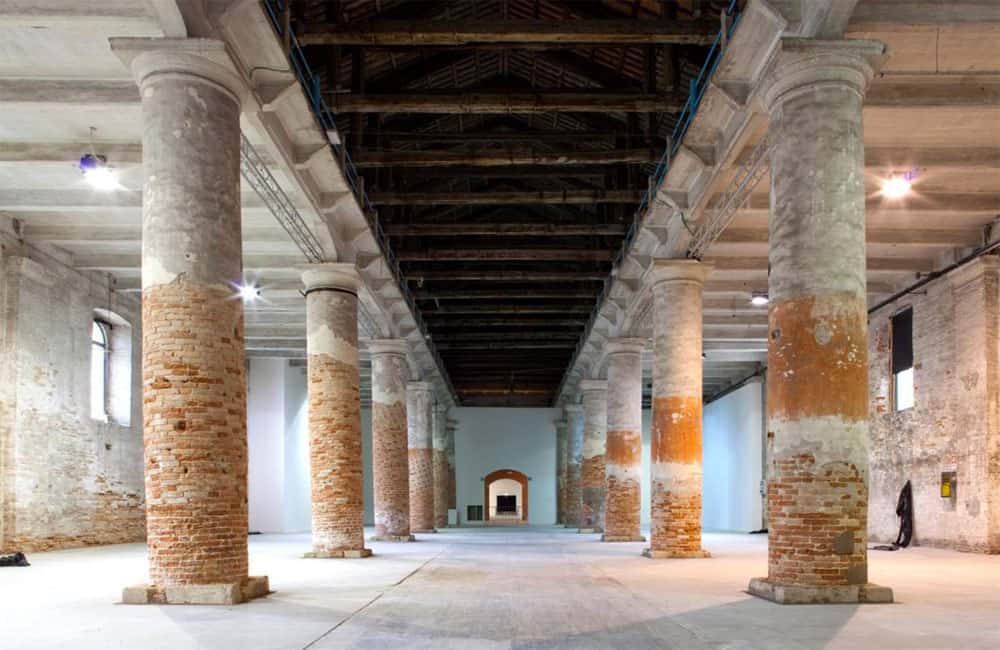 The inauguration will allow us to discover how the invited architects have responded to this manifesto. This edition foresees the participation of 65 national names, setting up their displays between the Giardini pavilions, the spaces of the Arsenale, and all around the historic center of Venice. In addition to the first ever and highly anticipated Vatican Pavilion on the Island of San Giorgio Maggiore (curated by Francesco Dal Co), other 6 countries will find their debut at the 16th Venice Biennale of Architecture: Antigua & Barbuda, Saudi Arabia, Guatemala, Lebanon , Mongolia, and Pakistan. Arcipelago Italia will be the name of this year’s Italian Pavilion.
Exhibition: 26 May – 25 November 2018.